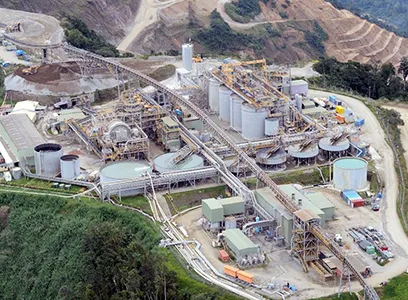 Papua New Guinea has been a gold exporter since the 1930s and has ranked as the 11th largest gold producer in the world over the last few years.

Papua New Guinea also ranks 10th in the world in terms of copper production, and has a very real potential to exceed the present production level.

Also, silver is a commercial by-product from most of the mines. Papua New Guinea has extensive reserves of natural gas and oil.

The main mineral deposits are copper, gold and sliver but there are also recoverable deposits of other minerals such as nickel and cobalt.

The Lihir mine in New Ireland Province of Papua New Guinea is a long life gold project which commenced production in 1997.

The economy has benefited from large ongoing development expenditure at a number of projects inlcuding the Morobe Mining Joint Venture (Hidden Valley) in the Morobe Province, Allied Gold (Simberi), in the New Ireland Province and the New Guinea Gold (Sinivit) in the East New Britain Province.

A first-ever nickel project for PNG, in the Ramu valley of Madang province of Papua New Guinea, has been fully licensed.
In addition to several mechanised alluvial mining projects, there are about 60,000 small-scale gold miners, who work as individuals, family or clan groups in Papua New Guinea.

Small-scale mining is estimated to produce about four tonnes of gold annually.
PNG’s mineral industry is dominantly gold based so producers have benefited from the continuing robust prices.

However, the global financial crisis has impacted on the junior exploration sector causing many companies to cut back on operations.

Drilling programmes have progressed or restarted at most of the advanced exploration sites around the country including Yandera, Frieda, Wafi-Golpu, Woodlark, Kainantu and Tabar, although programmes at several of these locations are at a reduced level.
One of the current highlights of the PNG minerals sector is the country’s success in becoming the worlds’s number one player in the development of deep sea mining. This is the major mining coup for PNG.

The State has lincensed the Solwara 1 project in the Bismark Sea west of central New Ireland. Solwara 1 has indicated mineral resource of 870kt at 6.8% copper, 4.8g/t gold, 23g/t silver, o.4% zinc.
Although gold and copper have formed the foundation for PNG’s mining industry in the past, the country’s mineral endowment is far more extensive. The prospects for other minerals has led a number of companies to target a range of other mineral resources including chromite, nickel, iron, platinum-group metals and industrial minerals….